End of the year

I wait for the holidays to pass.  They were great!!  Got a week off of work to spend time with my son while he was on Christmas break.  It was wonderful.  I love spending time with him.  And of course, family.

The new year passes.  Man! I can’t wait to start a new year!  New beginnings, new things I wanna do, things I wanna accomplish.  2016 was hard for me.  Broken ankle, out of work for 3 months, it hit me hard financially.  But I made it through with good faith and the help and support of great family and friends.  Mid October, I went back to work, to my normal life.  I can walk!!!!  Yay!!  But I’m done with 2016.  Bring on 2017, I’m sooo ready and it’s gonna be sooo much better!!!!

Jan –  It’s time for my annual check-up, I’m a few months early but I really wanna know what’s up with this stabbing pain that won’t go away.  I can’t even hold or press anything to my right side that’s how bad it’s gotten, so I make an appointment,

I see my lady doctor.  Well, my primary GYN is out on vacation so I get her assistant.  She did a great job, but I will always prefer my main GYN.   I go over my concerns with her and she does her exam.  Sure enough she feels what I was talking about and man, was that exam painful!  I know they have to touch, but that hurt.   She writes me out an order to go in for a mammogram.   This is no news for me.  I have been doing mammograms ever since I found my first cyst when I was 30.  I’m used to this but there is nothing fun about going for a mammogram.

Men, don’t ever judge!  No woman ( and I think I speak for many, if not all ) likes to get their girls smashed between 2 plates to the point where you can’t breathe and to where they look like crackers, just to see what’s going on with her boobs.  It’s painful, it’s uncomfortable.  Yes, it hurts.   And yes, they do get smashed between 2 plates, that is no lie.  I don’t really think a male would favor getting his boy and 2 roommates smashed on an annual basis, like crackers, just to make sure he’s healthy.   I have no idea what a male has to endure to keep his boy healthy.   Maybe I’m wrong, maybe they get smashed too?  Who knows? 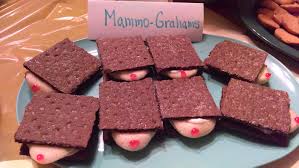 Anyway, with that being said.  I schedule my mammy.

Back in late summer 2016 I was healing from a double broken ankle ( ouchie ) and trying my best to give it as much water therapy as I possibly could in our pool.  Which was the best medicine for my ankle.   Plus,  who doesn’t like being in the pool?!   Well, usually after spending time in the water, I would just relax.  Sometimes, I like to lie down, to just rest for a bit, I like to lie on my tummy to relax.   On one particular day, I did just that and noticed that it was painful for me to do so.   I like to lie flat on my tummy with my arms bent out under my head.  This was painful for me,  I had pain under my right breast.  I thought this to be very unusual.   It wasn’t there before, like the last time I laid on my tummy.  What’s going on?

Well, over the next few weeks I would continue to do this and there is was again.   Pain in the same area.   It made it uncomfortable now for me to even lie on my tummy anymore.   So, I did a self breast exam,  something I’ve come to do quite often.   Well, nothing,  I didn’t feel anything, but I did feel pain to the touch.   hmmmm?

This continued for the next few months, so I did the self breast exams and still nothing.   Finally around Thanksgiving that pain became a shooting, stabbing kind of pain that became quite bothersome.   It started to hurt while I was doing normal everyday things.  I no longer had to lie down to feel the pain.   Now it was popping up randomly throughout my days.  Not good.

I started to think that maybe I jabbed myself in the area.   You know our boobs are very tender girls and when they get hit or jabbed, it can be painful.   At my work, we have bag racks on the counter that are just the right height for me to get jabbed in that area if I leaned over one.  So, that’s what I thought I did, even though I remembered doing no such thing.  But, it would explain it.   The stabbing pains continued and they hurt a lot.   I do another self breast exam and  *GASP*  I feel something!!  It’s small, but it is a lump under my right breast just where the pain is at.   I don’t think much of it and I’ll tell you why.

For years,  I have had and get fibroid cysts.   What those are, are fluid filled sacs.  The condition is very common and also benign, meaning that fibrocystic breasts are non malignant ( non cancerous ).   I’ve been getting them ever since I was 30, 5 months after giving birth to my son.  So, I’m very familiar with them and yes, they are painful.

Like I said,  I don’t think much of it because over the course of the years they have continued to ail me and all of them always turn up as fibroid cysts.   Fibroid cysts can get so filled with fluid that they can grow to the size of a golf ball, which I’ve had, and sometimes to relieve that pain, they need to be aspirated, meaning fluid taken out with a needle.  Needle Aspiration.   What makes them so painful, is when they get so filled with fluid, they become enlarged, therefore making them painful and uncomfortable.   Some last a very long time and eventually some dry up and go away on their own.   And the doctors have always told me, “be happy that they are painful,  it’s the non painful lumps that are the most concerning and most dangerous.”  Because for the most part,  cancer itself is not painful.  Not usually.  Cancer is silent.  A very silent devil.  Please, always remember that.  And because of that knowledge, I told myself, “well, it’s painful, probably another cyst.”   So, in a sense, I blew it off.

That stabbing pain goes on and on and on.

Ready for a new Year

Time to get Poppin’

Back to class, this time, chemo class

The 13 days of Chemo

There it goes, but remember. . It’s not just Hair!

The highs and lows of A/C

The good Fight! (The good, the bad and the HORRIBLE!!)

The light at the end of the Tunnel

The leap of Faith

Lord, I hope this day is Good